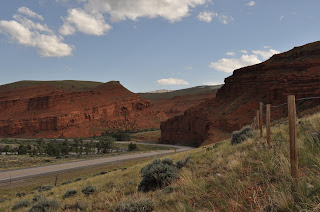 I took an actual vacation this year and traveled to Wyoming. I had never so much as driven to the panhandle of Oklahoma by myself , but I had no qualms, and jumped in a rental car with my cameras and went. The only thing I reserved, was a tour on the Pryor Mountains to see the wild horses.    I've never had so much fun in my life. I drove the Bear Tooth  and the Big Horn Mountain drives, saw the Tetons, Jackson Hole and a smidgeon of Yellowstone.   And of course the wild horses. Something I have wanted to do for years.                                                         The Tetons at sunset.                               Saw these buffalo in Meeteetse, the photo below was taken in Cody.    I met several interesting women while I was there and enjoyed hearing their stories and talking with them. I spent most of my time just driving the country and looking for wildlife and taking photos. It was an amazing journey.
1 comment
Read more

Kick Some Dust Up... 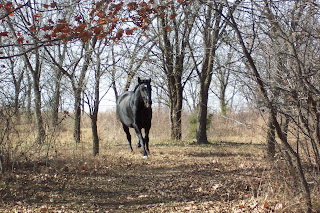 How does one revive a long neglected blog? A lot of life has happened to me and you since I've been away.  Lets start here and I'll share any memories that seem worthwhile, but its a new day to head down this path of the present , so lets get rolling and kick some dust up! If you are here for the first time, welcome ! I share a bit of my life here about my farmette, my animals, my writing and art. Right now I am in the middle of some home projects that include fence mending. That big black girl of mine thinks fences are put up to rub on, knock down, solve like a puzzle as to, how to get "over there." I have been art and writing busy too, and will keep you updated on a rather large project I am working on. That's the welcome back post, now for the good stuff ......
1 comment
Read more 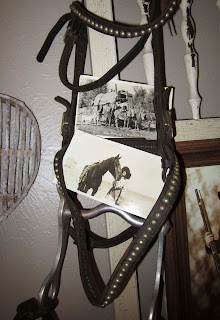 Do you ever, on the spur of the moment hop in your vehicle and head to parts unknown ? This past Saturday my girlfriend and I did just that and headed west to Amarillo Texas. Neither of us knew what was there, and upon arriving decided "nothing" was. We looked for the old part of Amarillo, but just found the undesirable part of Amarillo. We were just about to turn around and head back home. We were hungry and a bit disappointed. We saw two policeman talking beside their vehicles so we pulled up and asked them where the "coolest " place in Amarillo was. One of them just laughed and the other looked up towards the sky with a grimace on his face. Meaning, there was no "coolest " place in Amarillo. He told us about the place where if you can eat the 72 ounce stak and all the fixins that come with it you get it free. Her and I put together weigh exactly 251 lbs and I don't eat meat. We explained we wanted the old part, the district with fun shops and the l
4 comments
Read more

- April 26, 2013
This is a friend of mine who is a wonderful horse advocate/rescuer. This is the story of Summer Brennan {Click here} and her mustang Amado.... enjoy.
1 comment
Read more 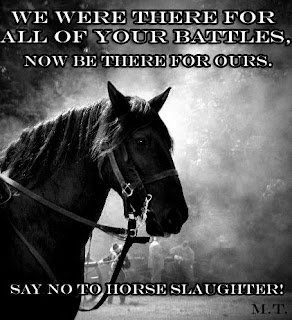 The Safeguard American Food Export Act, just introduced into congress may save the horses. Please go to facebook and go to Oklahoman's Against Horse Slaughter 2012 and Beyond, there is a post with a link to a petition, and send an email to your Washington Representatives. I can't get my links to work here for some reason. Imperative that you call your representatives in Washington, tell them you want them to support HR 1094 /S.541 Safeguard Act, and to stop using your tax dollars to fund horse slaughter. They are moving ahead with things at this point in Oklahoma, a meat company has just applied for USDA approval to slaughter horses. Big Ag rules here and the legislators pander to the cattlemen. The cattlemen are behind the horse slaughter bills here, so many are boycotting beef. Cattle ranchers are also the reason the USDA spends 100 million dollars a year to kill wildlife. Some of their hired killers are quite abusive. I know politics is not fun but the word has to spread
2 comments
Read more 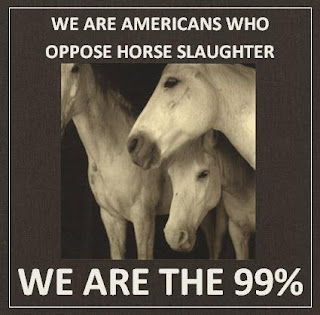 Hello all ! I don't know how many of you know that I am from and in Oklahoma. Our {crooked} legislators have decided to force horse slaughter on us. We do not want it, but we are having a hard time getting the word out. Our media here is, well I suspect been told to keep quiet about all of it. So we - Oklahoman's Against Horse Slaughter {on Facebook} are battling. I have provided a link here if you want to help. We can get great exposure on this if we get enough "up" votes. Please visit the link, register, which is super quick, email & password - done.... and hit the "UP" arrow on the left of the text box. Then sign the petition, you're done ! Visit us on Facebook to become educated about the subject, because you can help even if you don't live here. Help us stop this unnecessary evil. Thank you !!!!!
4 comments
Read more
- February 19, 2013 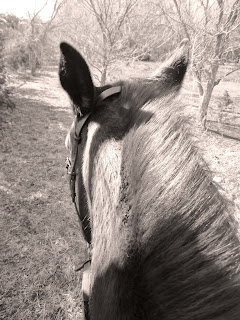 Sunday I hopped on Indi for her to teach me a lesson, I mean to ride her for a little while. I didn't put on my helmet, which is rare, even though we usually have an uneventful experience. The back of Indi's pasture is wooded and I don't know what kind of horse eating monster was loose in the woods, but she was not going anywhere near them. Blowing , snorting, jumpy, not paying attention , not stopping when asked, turning and leaving without being asked ..... I finally had to get off, do some ground work with her and show her that the woods were safe and that what I say still goes .... I told her she could take most anything that came out of the woods. She was unimpressed and proceeded to forget about personal space and leading manners. Whirling, bumping, pulling.... more ground work until she settled down. I rode again for a few minutes to reassert my Alpha mare status. Then I gave her the evening hay. That was the answer to everything, the monster apparently slinks ba
1 comment
Read more
More posts

To Thine Ownself Be True 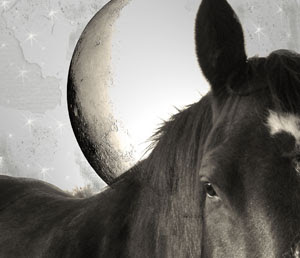 Take a Ride into - 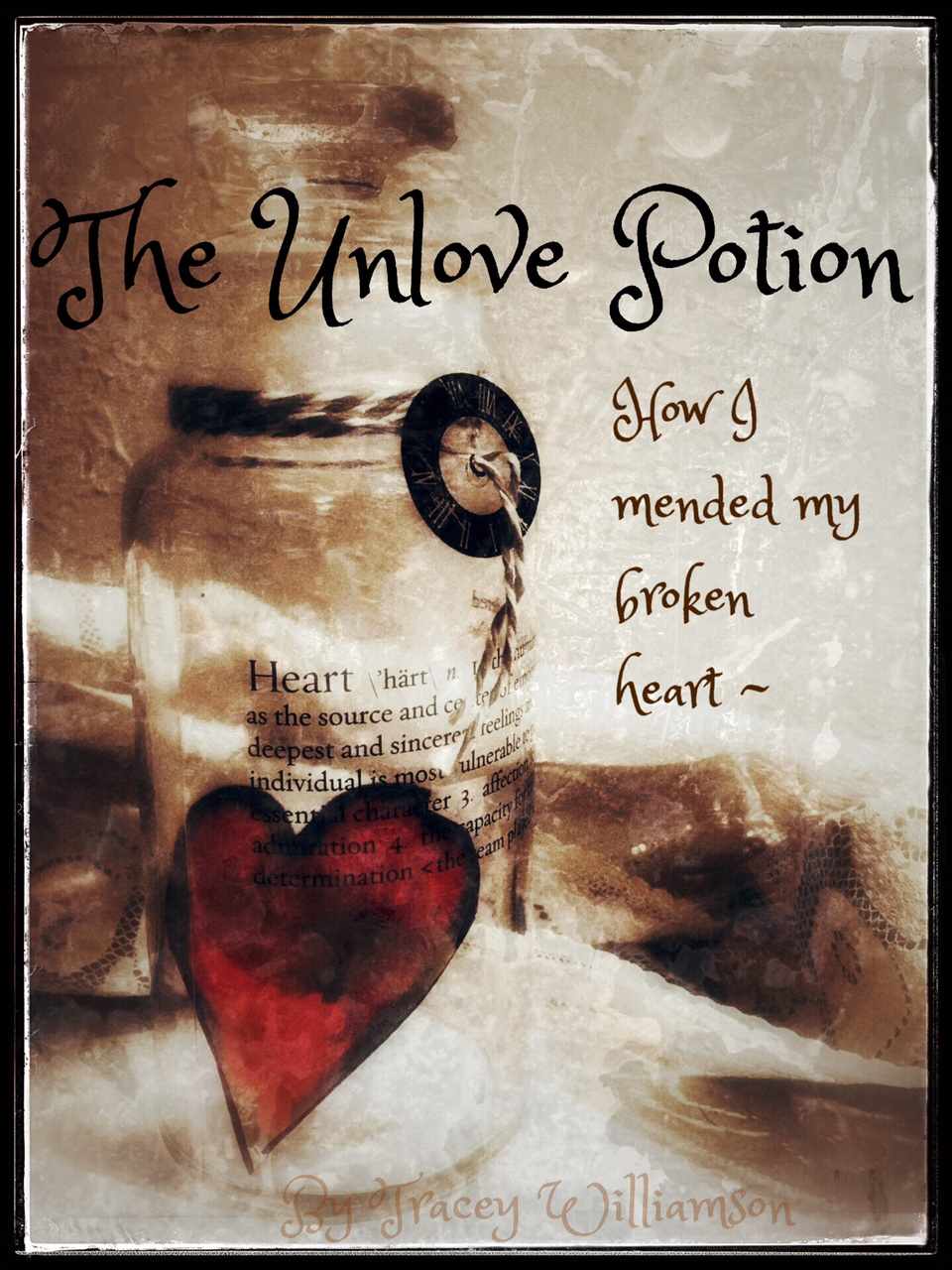